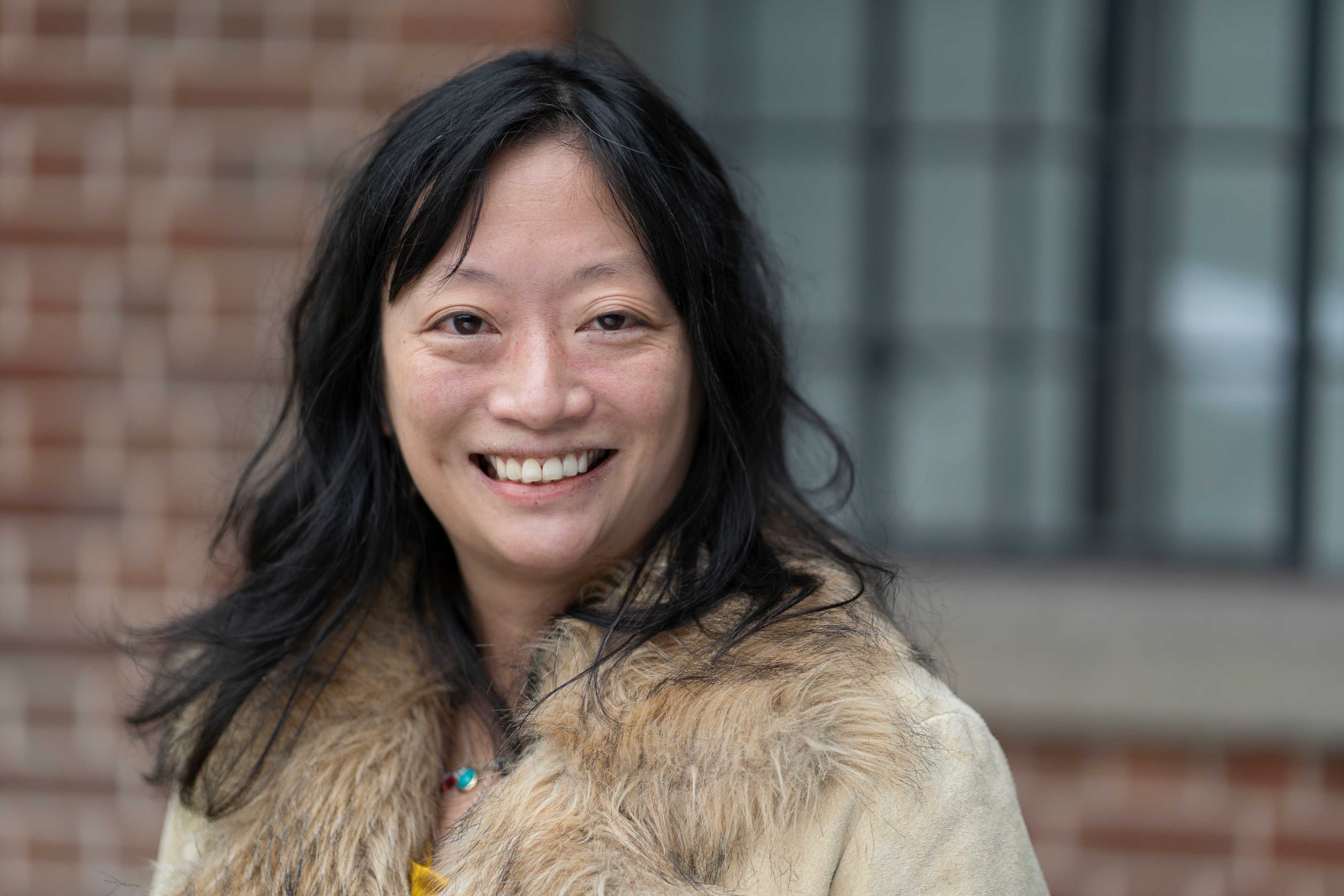 Mei Chin has written for Saveur, Gourmet, Fiction, Bomb, Vogue, Gilt Taste, Lucky Peach, Irish Times, Sunday Times (Ireland), Irish Independent, and Food & Wine Ireland. She has taught food writing at Yale University (New Haven), and has won a James Beard/ MFK Fisher and two International Association for Culinary Professional Awards. Her essays have been included in a number of Best Food Writing anthologies. She is a co-host of the podcast Spice Bags, with Blanca Valencia and Dee Laffan, a podcast that celebrates international food, the people who are behind it and how it is helping shape the modern Irish palate.

I came across Mei Chin on Irish social media. Her name was whispered to me once or twice, “oh she’s great” they would say, “you’d love her” and so I’ve kept Mei in the back of my head for quite some time now.

You might know her from the telly as she is a regular on Ireland AM or you may have read some of her articles, there was a gorgeous one in the Independent about Christmas dinners from around the world which warmed the cockles of my cold dead heart.

But what you may not have done yet is listened to her podcast which is a shame for you, or actually no, it’s great, you get the pleasure of listening to it all from scratch starting from the start. She is energetic and fierce passionate, delightfully foul mouthed and with an opinion. And what pleasure to hear a foreign voice chatting about the food in Ireland. I can relate to her and she is not afraid of a tough subject. A woman after my own heart, there is no doubt.

Of important note: Spice Bags are putting a call-out to everyone who has an international connection and have a recipe to share or a story to tell. Please contact Spice Bags directly on any of their social media channels, or even give me a shout and I’ll happily introduce you.

I have wanted to write since I was thirteen, something that my parents supported, which goes against the Chinese parent stereotype. After college, I fact-checked at two fashion magazines while pitching stories and writing fiction; eventually a story I wrote about my family’s food traditions around my grandmother was taken up by the food magazine Saveur. I had been cooking all my life but had not thought to combine it with writing. Plus working with Saveur’s marvelous editors Margo True and Caroline Campion was eye-opening.

It lets me write! I flatter myself because I think that by writing about food, it somehow satisfies other literary longings, and that through it, I can paint stories, characters, and history, or figure out my own personal angst.

What are your professional ambitions? What’s next for Mei Chin?

Currently I am co-hosting a podcast, Spice Bags, with the wonderful Blanca Valencia and Dee Laffan, where we tackle the subject of international food, the people that make it, and how it is shaping the modern Irish palate today. I’m loving the interview aspect of the podcast; all three of us want this to become a platform for unheard, international culinary voices in this country. I am planning a magazine with Georgia Freedman (Saveur, Cooking South of the Clouds), Ampersand: Eating at the Cultural Crossroads, which as the title suggests, is about great writers exploring, in long form, how every dish is a juxtaposition of many cultures. Plus, I am working on a novel and a memoir, but isn’t everyone?

In your opinion, what challenges women face in the food industry?

First off, all women in the food industry (and other industries for that matter) need to know how to negotiate a salary, and when to demand a raise.

Also in my opinion, sexual harassment and bullying remain prevalent in Ireland. I’m a writer, and don’t have to deal with this on an everyday basis. To be honest, the blithe, entitled machismo that drove food culture was exciting for me when I was in New York a decade ago. I am now also thankful that it’s being called out.

I feel like the current gender dynamic in the Irish food industry smacks of hypocrisy. “Woke” Irish male chefs applaud #metoo and continue to condescend, grope, leer, and inappropriately text at 2 AM. I’ve witnessed too many females in the food industry being conflicted because a man has made a pass or bullied her. Of course there are official channels, but few women use them. In part it’s because the food community here is small; but also making anything official is scary.

My sister-in-law, who is a tech superstar in California, mentors young female engineers. Part of this includes spelling out many of the issues that the women might face and offering very precise solutions, with no waffling. Want a raise? What do you say when a man puts his hand on your breast? How do you spell out what you think you are worth?

When she explained this to me, I thought that a similar set of rules would be genius for women in the food industry, because it could engender confidence.

Tell us of one woman in the food industry who consistently inspire you and why?

I cannot do just one woman, because in my life there have been too many women that I consider genuine queens.

Anita Lo, who was owner of Anissa in New York and author of Solo, is unbelievably talented as a chef, and has been quietly promoting ethical conduct in her kitchens without fanfare. She’s also a brilliant writer and she is extremely funny and kind.

Ruth Reichl, I remember reading when I was a child and she was the reviewer of the New York Times. She wrote about food like it was fiction. She showcased restaurants that weren’t popular. I’ve attempted to emulate her ever since.

Claudia Roden is a peerless writer and recorder of recipes and stories, and never stops working. She has a dauntless adventurous spirit, she burrows into historical scholarship and speaks multiple languages; she’s Indiana Jones as a petite elegant female. She once abandoned her car and went riding around with Sicilian truckers.

Maria Rosa Menocal was the Cuban-American scholar of medieval Spain who brought food studies to Yale University. Sadly, she passed away, but no one could juggle being a scholar and a sublime hostess and cook quite like she could.

My aunts and my mother, who are competitive cooks with their own distinctive styles.

Finally, Karen Smith, who is the pastry chef at China Sichuan, is my most “consistent” inspiration. Obviously she’s a genius pastry chef, but also she has so much freshness, curiosity, radiance, and off-kilter humor. In the kitchen, she is a protector, mentor, and friend of Chinese, Romanian, Sardinian, Indian, and Irish staff. Her razor-sharp mind never fails to astonish me; Karen grasps concepts and synthesizes them so swiftly, and her creativity knows no bounds. Knowing Karen restores my faith in the food industry’s potential.

What do you think can be done to help raise the profile and visibility of women in the food industry?

I think that the visibility/profile is excellent. I would just like to see more confidence.

Hopefully that’s yet to come.

I’d be such a tiger mom. I would have slapped myself for giving up hard science and math. I wish I had an honest grasp of biology, chemistry, and neuroscience; they would have enhanced the way I perceive food and the world.

Doing Spice Bags has been humbling because I realize how I can be a terrible questioner/listener, a crucial skill that I am trying to improve. As a writer, one has to have a relentless knowledge of grammar and syntax. Know another language (or two or three); I say this although my own languages are shoddy, but I believe that having another language is a catalyst for understanding people and cultures. Read widely and cultivate a passion about something that isn’t food, because let’s face it, food on its own is boring. Respond well to constructive criticism. Also be empathic, curious, and kind; this leads to better stories. When I was describing earlier the women that I most admire in this industry, I realized that kindness is a quality they share.

Are you a savoury or sweet kind of person? Please tell us about a real treat.