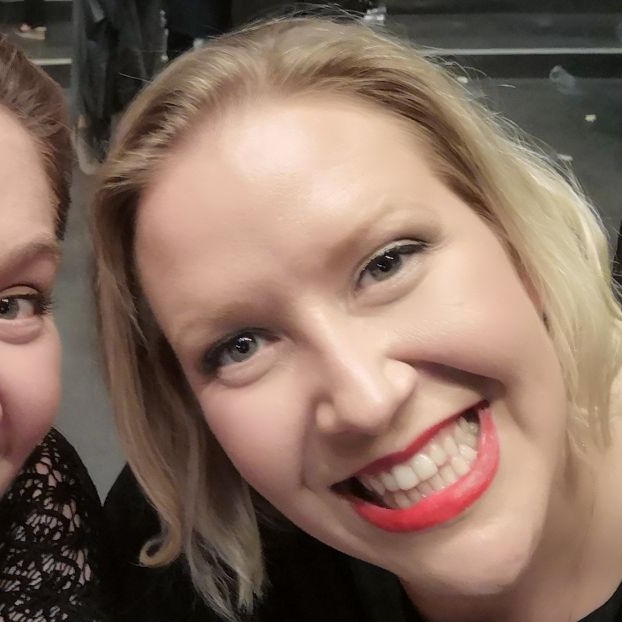 Sandy Harrington is the Chef Manager at Bandon Grammar School.

As this series keeps running, it is becoming evident that there are so many roles in the irish food industry, that I had never considered. We have have read about chefs, food writers, food photographers, food champions and now it’s time for the food educator. In walks, Sandy Harrington.

I think my career path was mapped out for me since the day I could walk, however as all young women do, I wanted to forge my own path. My mother is a chef you see, so while I was destined to be in the hospitality industry, I took a full circle approach to it.
At 14 I washed my first pot, at 16 I was pulling pints (there is a statute of limitations for the Garda to be mad about that isn’t there?), I took my first junior management role at 21, progressed to middle management at 23 and then, the recession hit as I was at a crossroads as to what to do and I decided, the only position I hadnt even a clue about running was a chef position.
So that’s what I did, I enrolled in CITs total immersion course after I had completed the last Failte Ireland commis course in Albert Road Cork and from there I worked on being a chef.
From there it was hotels for a few years and then Dublin Airport. I came back to Cork on maternity leave and didn’t go back then. I left chefing for about 3 years, the hours, the physical demands and more I didnt want to deal with while my son was still so young, so I sold my soul back to management for a few years and did some consulting for smaller businesses until this role came up.
Now I get to have the best of all worlds, I work for Bandon Grammar School, a 375 year old boarding school in the heart of Bandon, I get to  cook and create, educate kids about food and how to prepare it, work with the team and manage the department and also have a work life balance – meaning day time hours and a Monday to Friday!
The role is a 360 approach to food, I took what would be the widely thought concept of what Boarding School Food was and turned it on it head, taking the belief that food should be not only an integral part of the students social life in the school, but also form part of their education, introduce them to dishes of the world that they had for the most part never heard of.
We then developed a Food Council with the students driving it forward, for feedback and rolling out demonstrations, this year we are now building a garden, the students have taken seeds, growing them to be planted in the raised beds and over the summer we hope to install the poly tunnel where we will introduce a hydroponic element to growing. I believe that we have lost the knowledge and maybe the want to know of where our food comes from so by doing this I hope to show them what it takes to have that salad or root vegetable on their plate at lunch.
Coming from a commercial background budget is something that I am conscious of however it’s not something that is pushed, we use local suppliers as well as the big guys, its a quality mark that we work towards rather than ticking a financial box. From the first day I stepped into the role we were producing about 400 meals a day, breakfast through lunch and now are up to around 900, redeveloping the department, the aesthetics of the dining room and the content we provide has given the students confidence in what we do and the ability to cherry pick from the offering really helps to keep it interesting for them.

It’s difficult to put into words, I’ve always had a love for this industry, be it loving the team I work with, being challenged by the work I am doing or having a project to complete.
I love that I have a team that are with me through thick and thin and will go above and beyond, not for me but for themselves now. It once may have been a chore to get on with it, now it is second nature.
Now, add in the ability to guide young people through their early culinary journey, we get to know them for who they are, what the like, answer all the questions (my favourite was when a 2nd year girl asked ‘where does custard come from?’ to which I replied its made from eggs, cream and sugar, the answer I got was – ‘Nah, its made from powder Sand’) and that’s where I realised what we do could more than just to feed them food. We feed them nutrition, knowledge and confidence to ask when they dont know.

What are your professional ambitions? What’s next for Sandy Harrington?

I’m in no way finished here, there are many projects that are in their infancy or yet to begin, the School Garden is the next big project, followed by an extension of it, hopefully, we are starting an in-house Instagram page for the Food Council to gain more feedback and engage with the students on a more familiar level, I hope to be able to develop another educational aspect to the department with an area for teaching older preserving techniques, smoking and curing of food among some of the plans so far.  I always look about 10 years down the road when it comes to work so myself and my sous chef and another chef are stepping up our efforts in our entertainment and catering company WIZ Cork, so watch this space!

I’ve been very lucky, very very lucky. I can only count on one hand the amount of serious issues I’ve had in the #glassceiling area. But I found that I worried what having a child would do to my career, the fact I even had to think about that says a lot. What would I have to sacrifice to have a balance in both? was that even possible? Also the ‘silly little girl’ looks are still about the place, no matter your skill, there are still those on both sides of the gender/Age divide that would doubt your ability or deserving of your position. Thankfully I had a great team of mentors both male and female and for that I am eternally grateful.

Mairead Jacob – Idaho Cafe – This will sound a bit voyeuristic however Ive always loved Idaho when I get into the city, her use of home grown products, attention to detail and a cracking twitter account do it for me.

I think we need to look at the food industry in a broader spectrum than currently is popular, really its all about the chefs at the minute and with a shortage of us and an even shorter number in the female category. I remember in CIT there was a trip to Europe being organised by the college for a chef and a front of house to go and compete at an international level, as a pair, duo, one succeeds so does the other affair, cant for the life of me remember its name, but I was selected to represent FOH and my friend Annemaire Butler (amazing chef btw) was the chef, did I mention we had to learn french and compete in a foreign language. Anyway, I feel that if there was a little more work done in the full food industry – Chefs, food producers, farming, service excellence etc we would stop seeing that one female powerhouse as the exception and more as the rule. We are everywhere.

At 33, with a young son, realising that the paycheck wasn’t worth denying who I was meant to be and starting all over again. And winning at it… so far!

Slow down, think, and if it doesn’t work out, learn and keep moving. Its going to be alright.

People skills – The team do the work, not just me and I just need to give them what they need to be their best. And laugh with them when it all goes tits up.
Procurement and organisation – We are in West Cork, we dont have daily deliveries so to balance the books and have the orders coming in is pretty important.
Flexible- when the top 2 dont go to plan – bend and make a new plan.. adapt or die isnt that what they say?

What is a simple chefing tip that can be used at home to make cooking easier?

Plan and have space. Plan your meal or at least have the ingredients needed, if you are trying something new, have space so you can see all of your ingredients and you wont forget the important ones – this is in particular for pastry!
food blogger, irish blogger, irish food blogger, Irish Food Bloggers, properfood ireland, Sandy Harrington, Women Of The Irish Food Industry
Share ON:

New Restaurant Trends From Around The World