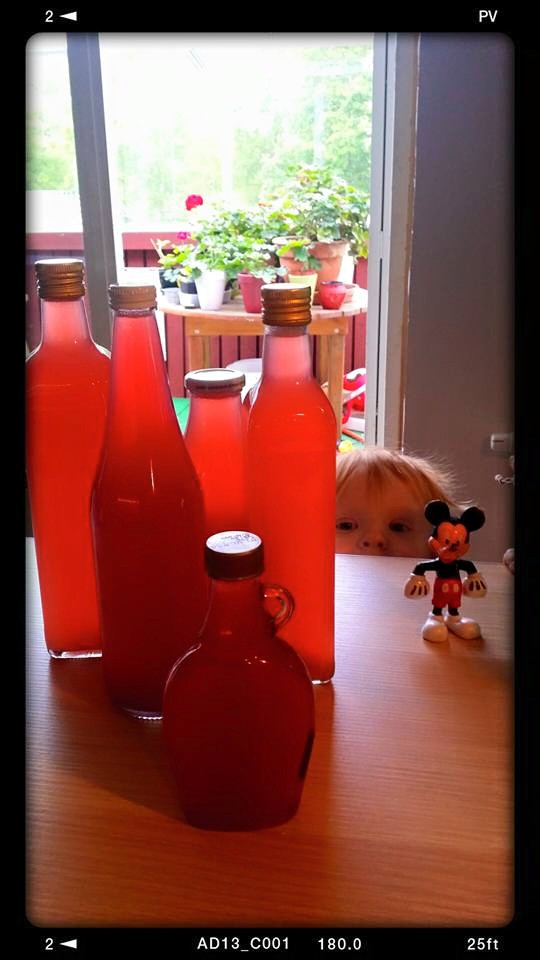 My friend Kats is a food genius and I wish she would adopt me. I mean she can cook. Like really cook. If you’ve ever had the fluffy courgettes bites on this blog they’re her ideas too. Like I said proper genius. So I’ll let her do the talking!

“Anyways, the sexy syrup. I guess there are tons of recipes out there but if you want to do it my way then yea, you sneak into your neighbour’s garden and pick all the rhubarb you can carry. Mine is ridiculous, but his looks like a forest so it’s only fair that I take it! Then you go home, cut the ends off, chop the stalks up, cover with water (just about) and cook on a low heat for 20 minutes or so. You’ll see, when it all gets mushy then it’s done. And of course you’d remember from the chemistry class that one should never ever use an aluminium dish for that, right? Then you drain all the rhubarb bits out and keep the juice, obviously. Throw in sugar, stir until it dissolves and let the gorgeous pink nectar simmer for a bit. I guess the amount of sugar you want to use is a question of personal choice. The classic rule is 1 cup chopped rhubarb = 1 cup sugar, I took about a half of that amount and it’s perfect. Of course, if you want it more sticky then you go all in, and it will hold longer as well. Anyways, time to bottle this gold up! If there’s any white froth on top, skim it off. And if you care for the looks then let it cool down before pouring into a bottle – syrup will look more clear and bright. If you have plenty and you want to preserve it then you bottle when hot, but in this case there will be a bit of brownish sediments in the bottom later. BUT however you do, make sure you’ll get those nice bottles like they have in fancy home decor and cooking magazines! It doesn’t add to the flavour but you get to put a real nice picture out there, and we’ll look and think “Oh man! That bitch has even got those nice bottles!

You know, once you taste the syrup, you’ll know exactly what to do with it.  I’m making a vodka cocktail – ice, vodka, squeezed lime wedge, a splash of rhubarb syrup, and top it up with soda water. And I put it in a mojito instead of sugar coz it goes nicely with peppermint. Or just make a refreshing lemonade mixing with plain soda water. Or just eat with plain Greek yoghurt – tried on vanilla ice cream but it was too sweet to my taste, this goodness all together. Or use it as an ingredient in sangria. Or, I have 4 bottles of prosecco in the basement that’s too dry, may try to pimp it up with it. Or marinate chicken in it, or inject it into a sausage – the sky is a limit!”

The Weekly Salad – Broccoli and Mango