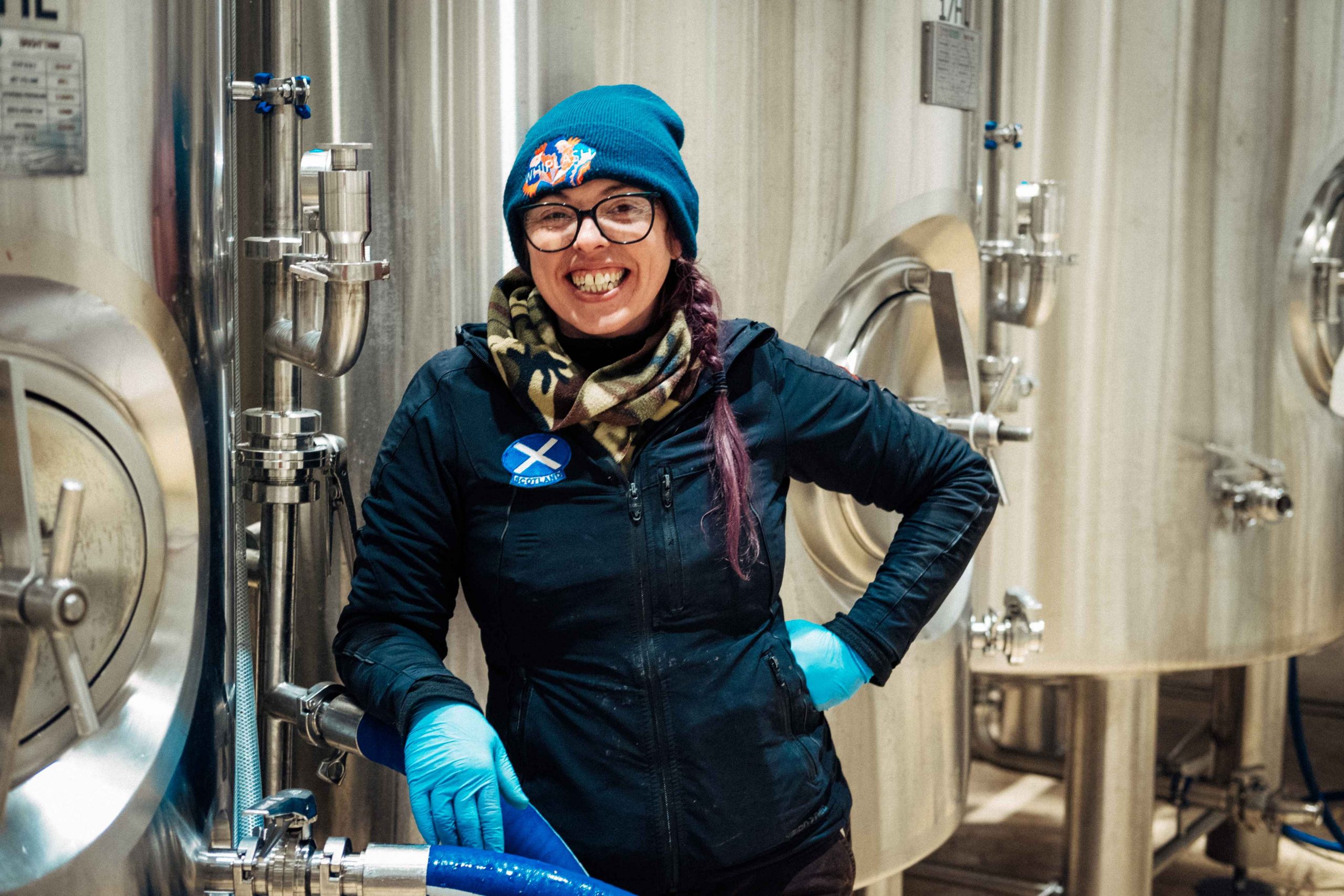 Lynsey Campbell is the lead cellar brewer at Whiplash brewery, headquartered in Ballyfermot, in Dublin. The brewery was opened in 2019 and I’m excited to see what they come up with. I’m a fan of fizzy beer (I would be awkward) and I’m forever hoping for another Euphoria (brewed by Peter Curtin in the tiniest brewery in Lisdoonvarna.

More importantly, there is very little I enjoy more than seeing a woman embracing her passion and turning it into a career. And a very successful one at that. And that is exactly what Lynsey Campbell is doing and it’s wonderful to read.

If you want to catch Lynsey Campbell and see what she is about, you can see her tomorrow and Monday where she will be running 2 online events for International Women’s Day. Do have a look at the Whiplash website for all the details and of course, to register for them!

How did your career path bring you here?

It all started while I was working overseas in Australia. I was working in an Irish bar (believe it or not) and there was a new beer going onto the taps, it was a passion fruit IPA. From one taste of that beer I was hooked! I was such a wee lager lover and I was intrigued as to how this was beer made and how it tasted so good! When I moved home to Scotland in 2014 I got a job in a German bar in Glasgow and started attending many beer festivals, meeting lots of likeminded beer enthusiasts and getting to know the small craft breweries of the country. I knew then I wanted to work for a brewery and be part of the scene! I was approached by a wonderful cask ale brewery called Fyne Ales and they offered me a sales position. I could talk about beer until the cows came home but I wasn’t very good at closing sales and it became pretty obvious to me that I didn’t want to sell it… I wanted to be part of making it! I wanted to be part of the brew team there but unfortunately for the position available at the time I was considered to be “too small” and “not physically strong enough” so I took up a role in the brewery Tap Room working the bar and doing tours but I longed for the brew house! After many applications submitted, I was finally offered a trial for an Assistant Brewer role at Buxton Brewery in England and I was offered the position straight away. I was delighted! I finally had my foot in the door and I worked so hard to ensure it would stay there! Through pouring at beer festivals all over the UK I met and instantly became friends with the Whiplash crew. We would hang out, talk about beer and just have endless craic! So, when they invited me to their own beer festival ‘Fidelity’ I was buzzing. It was there they offered me a job at their newly designed brewery and there was no question about it. I packed up, moved to Dublin and I have now been here for a year!

I love my job. The fulfillment I get is seeing and tasting the end product, knowing you’re a part of the creation of something so complex and delicious is such a buzz! I love to share that with as many people as possible. Obviously this year has been tough with the absence of beer festivals, as that’s where we truly shine (with good beer and the sesh!). Also being around my team gives me unbelievable fulfillment, they’re so supportive and encourage me to be better and better at what I’m doing.

What are your professional ambitions, what’s next for Lynsey Campbell?

My professional ambition is to continue to learn and continue to love my job and life. A lot of brewers say they would want their own brewery but if I’m honest I couldn’t handle to the stress! I always said I would’ve liked to have been with a brewery from the start and be part of its evolution and I’m achieving that here and now. I would really love to take a year or two out and travel to other breweries all over the world, work with them and see how they do things. Hopefully that can happen one day!

In your opinion, what challenges do woman face in the beer industry?

It’s such male dominated industry, it can be easy to be intimidated by the “me man, me make beer” mentality that you’re faced with. Which is not only frustrating but so ironic as it was women who were the original ale masters! When I first started, I felt I had to prove myself twice as hard which was rewarding but also exhausting. Having a strong personality helped me to power through and progress without feeling patronised.

Tell us one woman in the beer industry who continues to inspire you and why?

There’s definitely more than one! When I was at Fyne Ales a German brewster (the technical term for a female brewer) called Yvonne Wernlein joined the team. As soon as I met her, I knew she was amazing! She was so knowledgeable and funny but most of all she took no shit from anyone! Instant inspiration! There are a lot of womens’ beer societies such as The Pink Boots Society and groups like The Crafty Beer Girls but I’m really inspired by the ladies of G.L.O.W (Global Ladies Of Wort). As we speak, they’re bringing together women from breweries all over the world to do one big collaboration beer for IWD. I was asked to get involved but myself and my amazing colleague Leah Kilcullen already had our plans in place. I’m so excited to see what G.L.O.W do next and really hope I can be part of it.

What do you think can be done to help raise the profile and visibility of woman in the beer industry?

I think we just need more exposure because we are there and our numbers are growing stronger as the years go on. Once society’s mentality changes to see that it’s not just men who can graft, get dirty and perform technical and physically demanding tasks then it won’t be a thing to ‘highlight’ woman in beer, it will only show people in beer sharing their experience, knowledge and passions.

What’s the proudest moment of your career so far?

I’ve had a few. I would say being known in the industry makes me feel proud. Being asked to do interviews and Podcasts to share my story and experience gives me such a sense of achievement, knowing people are interested in what I’ve been doing is quite cool! And being personally picked to come here and be part of Whiplash was such a huge boost for me. I’m hoping there will be many more proud moments to come.

Get in to brewing at a younger age, you could have so many more years of job love and fun! Also, don’t smoke you fool!

What are the top skills to do your job and why?

The top skills are definitely having a strong work ethic and care for the job as its’ pure graft and long hours, but when you have that drive and the passion for what you’re achieving it just becomes life. Brewing is a science, there’s something new to learn every day and I love that. Continually wanting to learn and develop new skills and techniques is essential to that life. Another very important skill is banter! I can truly say that I don’t have bad days in the brewery, sure things can go wrong and its stressful but as a team we have such a laugh that you can’t stay down for long!

What is the one thing you wish you had known when you started to brew?

That it’s ok to make mistakes. At the start I would be so hard on myself because I would get things wrong more than once and I felt a bit defeated when I wasn’t picking up the processes as quickly as I thought I would. But it just took a wee bit of time and as soon as it clicked that was it!