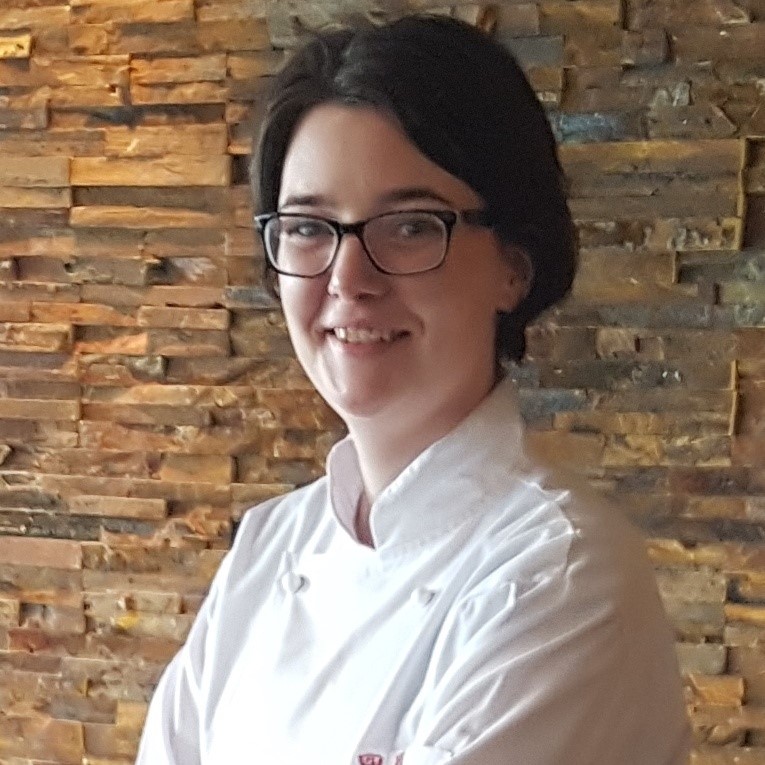 Karen Smith is the Pastry Chef in China Sichuan.

China Sichuan is a hidden gem. It’s located in Sandyford and constantly mobbed with locals. The food is good, the service delightful and the desert menu surprising for a chinese restaurant. Much like the restaurant, Karen Smith is well known to the locals but remains to be discovered by the larger public.

The general manager in China Sichuan had the following to say about Karen:

“Karen is one of the most talented young pastry chefs in Ireland at the moment. She has transformed the dessert menu and changed a lot of perceptions about desserts in ethnic restaurants. We have different palates and likes in desserts and she is very open to feed back and suggestions. My favourite is her chocolate selection.”

So read about my chat about Karen Smith and watch out for her work. She has gone quiet places, I want her to go to loud ones next.

When I left school, I decided to do a degree in Culinary Entrepreneurship as I thought the business side would be good and I’ve always loved food, cooking and baking.

In my second year in college we had to do work placements and I decided to do mine in a kitchen and I fell in love with it and then I was given the opportunity to work in the pastry section a few months after that. It was totally different but amazing and that was the start of the journey to where I am now.

I’ve been lucky to work with some amazing and talented people in the industry. I was working in the Four Seasons during college.

I made the move to The Lady Helen in Mount Juliet after college which was an amazing place to work but ultimately decided to move back to the city, as I wanted to be closer to my family.

I heard that China Sichuan was looking for a pastry chef. Which brought me to where I am now in China Sichuan. When I first made the move, it raised a few eyebrows as Chinese restaurants aren’t known for their dessert, at least in Ireland. Which is actually pretty odd if you think about it as a lot of other world cuisines use Asian flavours in desserts, particularly the citrus fruits.

Also, I am in the kitchen with a wonderful crew of chefs – they are mainly from China but also Romania and Brazil. Working here being surrounded by such amazing chefs with such different cultural and culinary backgrounds from myself has opened my mind and my palate in so many ways. I don’t want to sound gushy as I tend to do when talking about the chefs here but it was seriously the best decision I could have made.

Everyday is different, there’s always something happening.  It’s also that in some way that you get to be a part of something bigger you get in some small way to brighten someone’s day through food or be part of their celebration. Through food you can give someone happy memories.

Food, particularly baking and pastry is my artistic outlet. I can’t draw to save my life, when I’m sketching a new idea for a dish and when it’s actually on the plate the chefs are like that’s not the same thing.

What are your professional ambitions? What’s next for Karen Smith?

The world of pastry is so vast I want to continue to challenge myself creatively.  There is a lot happening in the Irish food scene at the moment and it’s evolving fast so I’m not sure what’s next for me. I would love to go to China and experience the food culture over there!

I’m not sure that women are particularly at a disadvantage over men. More that traditionally it’s an industry orientated towards men. Certainly, there are more men in kitchens but it’s changing.

The more people focus on gender the more it becomes an issue. To me gender isn’t an issue when I’m in work in China Sichuan, I’m a pastry chef not a female pastry chef, I don’t think of the male chefs as male chefs and they don’t see me as a female chef, we’re all chefs. This isn’t the same for all kitchens sadly. I, like everyone else, have heard the stories of what “really” happens in kitchens but I feel these tend to be romanticised in some ways, not to say that they didn’t happen but they’re retold usually by men who want kitchens to seem more hostile and intimidating than they need to be. Don’t get me wrong I’ve been witness to and experienced my fair share of questionable behaviour but I’ve never felt that it was because of gender.

The distinction is usually made by people who have never worked in a kitchen who ask what’s it like being the only woman? Outside the kitchen the chefs treat me different, but inside work we’re all the same.

I think the biggest initial obstacle for many who want to enter kitchens is the media and public perception. I mean honestly who looks at an industry reported as having egotistical tyrannical men everywhere and be like I want to work there? I certainly didn’t.

Also Irish people in general have a habit of being incredibly self-deprecating as in we will sing others praises and how awesome they are but when it comes to self promotion we tend to be a bit like “I’m okay I suppose but let me tell you about this person who is a million times better”, we just cant take a compliment.

It’s nearly impossible to pick only one there are so many! When you look into it usually there is an amazingly strong inspiring woman behind many Irish food ventures.

Thinking about the woman who had the biggest influence on me when it comes to baking, it was my neighbour Áine or third Granny as I think of her that really got me into baking. When I was small, I used to go to her house and she taught me how to make sponge cakes and scones and things like that. She had travelled extensively and lived in Africa, her food stories were fascinating to me. In Africa her Irish background of baking with her mother came into play so at dinner parties she was always in charge of desserts, and her experimentation with flavours and ingredients still inspire me. Her family recipes are still the only ones I’ll use for a sponge or a lemon cake.

In the food industry I really admire and am inspired by the passion and creativity of producers like Rhoda Kirwan of Rhoda Cocoa and Freeda Wolfe of Intelligent Tea.

Interviews and articles like you are writing allows people to see that there are women thriving in roles that are perceived as male and that it is possible as a woman to succeed in the Irish food industry.

If you look at the industry the majority of prominent food writers in Ireland are women, as are artisanal producers.

It’s about creating awareness and hopefully soon the distinction between men and women won’t have to be made. I’m told having a woman in a kitchen changes the dynamic and tames some of the laddish behaviour but being a woman, I won’t ever be able to confirm that!

It’s in the everyday operations, seeing something you envisioned in your mind come to life on the plate. Making things I never thought I would, like my first chocolate sculpture. Getting to meet and talk with Benoit Blin about pastry when I was in the finals of the Valrhona Patisserie Championship in 2017 was absolutely amazing, that was probably one of the best moments so far. Competing in the competition was also an amazing experience.

Even if you are told it’s not possible try it. It might work or it might not but at least now you know and you learn along the way. It all about learning.

Its not really a skill but passion and the relentless pursuit of your goals is the key, any skill you can learn but if you don’t have passion and a love of food you won’t stick at it. Kitchen specific skills are knife skills, pastry skills and obsessive attention to detail. All the others are generic organisational, time management being big ones, communication is up there as well. You need to be flexible in your approach as you never know what’s going to happen. Leadership and interpersonal skills are also important.

Anything chocolate!!! But I am also rather partial to a good lemon drizzle cake or my Mum’s rhubarb crumble with natural yoghurt. I’ve developed a love of ma yuan (麻圆) (I don’t know the English for them) they’re deep-fried sesame balls with various fillings that Chef Lee Ke is an expert in making and also dan tat (egg tarts) that the chefs here make occasionally as a treat for staff. I could go on forever. I love dessert!

Left-Over Lamb And Peas – Spring In A Plate