Until very recently Joyce Timmins was the executive chef at the Rotunda hospital in Dublin.

Joyce Timmins has achieved the impossible. She has managed to make hospital food not only fresh and nutritious but also actually appealing and interesting.  She has proven that institutionalised food needn’t be the worst of the worst.

Joyce Timmins has demonstrated with hard work and flair that if you believe in something hard enough, if you care and keep at it, there is nothing you can’t achieve if you set your mind to it.

When I grow up, I want to be Joyce Timmins. She is a hero, and hers is a name that you’ve only just started reading about. Mark my words.

I started my chef career on a post leaving cert course in Crumlin college, after my year there I gained a place in Cathal Brugha for a Professional Cookery 2-year Course, City & Guilds 706-1 and 706-2. Kevin Thornton was my pastry chef tutor, and I loved the passion he brought to pastry. He really encouraged me and developed my love of pastry. It was the section in the kitchen that I expressed myself the most.

From College I went to the Conrad hotel to work in the Pastry Kitchen which was a fantastic kitchen with fantastic equipment.

While at The Conrad Dublin I applied for a stage in Le Manoir aux Quat’ Saisons , hoping to gain full time employment in the pastry section under Benoit Blin (judge on Crème de la Crème). I worked in Raymond Blanc’s restaurant for 1=one year and four months.

I am quite the home bird and wanted to return home, I mentioned to Raymond Blanc that I’d like to go home and would love to work in 2 Michelin Star Restaurant Patrick Guilbaubs in Dublin. The next day,  Restaurant Patrick Guilbaubs had offered me a job in their pastry kitchen. So, I returned to Dublin and took up position in the pastry kitchen and it ended up not being for me at all!

I started my new role under the executive chef Ed Cooney in The Merrion Hotel, as sous pastry chef under Paul Kelly. I stayed in this role for two years, gained so much experience and then moved to The Killarney Park Hotel as Head Pastry Chef.

When I had my daughter ,Lily, I took some time off but when I returned to the work force, I felt the hot kitchen, rather than the pastry kitchen, would be more flexible for me as a mam. And so, I became sous chef for the Expresso Bar, in Ballsbridge. I later became the Head chef and found a new passion for the kitchen all over again.

From there I moved into contract catering and I began working for KSG (Kylemore services group). This kind of cooking was totally new to me, batch cooking was something I was not familiar with, as I was just used to cooking a la carte. It was a big learning curve, and I loved it. I adapted the recipes I was using in restaurants that I would serve in these catering units and it worked brilliantly. I started as a chef manager but then went onto the Food Development team. It was a fantastic opportunity and loved every minute.

I remember my sister being in hospital and the food was dreadful. I wondered why this was acceptable. I wanted to make a change, could I change it? So as soon as I saw the advertisement for Executive Chef for the Rotunda, I applied and got it. I made changes instantly, my name was now associated with the Rotunda, so it had to be my food. Food I can stand over and be confident about. I am very proud of the food and the impact I have made.

I am very fulfilled in my career; I have worked hard and there were times when I missed out on special occasions because of work. But the buzz of that last service is an adrenalin hit. Nowadays, the pace is slower but rewarding in different ways.

Taking younger chefs under your wing, developing and mentoring is a gread feeling. Seeing them progress and their career blossoming is fantastic. Achieving what I set out to do in the Rotunda has been fantastic and I believe I was able to turn perceptions of hospital food on its head.

What are your professional ambitions? What’s next for Joyce Timmins?

I would love to get involved with HSE nutritionists and role out menu cycles across all HSE hospitals. Every hospital has the same menu, recipes, how to present dishes, what sides, accompaniments and costing for each dish. Training provided for all of this. To improve the patient experience and expectations of hospital food. It would be a huge task and brilliant to achieve.

As it happens, I have moved from the Rotunda and I am now working in the Marymount Care Centre. It has its own orchard, a vegetables, herb and berry garden which is fantastic.

Women must work twice or three times as hard as men in the kitchen. They must show that they are tough. Kitchens can get quite pressured, aggressive and intense, so as a woman you must be able to stand your ground and be very vocal. I am a single mam and it could have been quite difficult to have a thriving career, but I was lucky, I have a great support network. I think as you get older you become calmer in the kitchen and don’t tolerate what you did before.

In one job I learned that my male peers, same title earned €10,000 more than I did, I left that job because of that. It has never happened again.

Tell us of one woman in the Irish food industry who constantly inspire you and why?

I’m old school and for me the person who stands out the most is Darina Allen. She is a legend. A leader in the Slow Food movement and the founder of the first Farmers market. Her school Ballymaloe is renowned worldwide. Some fantastic chefs coming out of Ballymaloe cookery school. She is still so on trend and has her 19th cookbook being released. For me Darina Allen should be admired for staying so current in this very changing industry.

I think what you are doing here is amazing and this helps raise women’s profile. I think its up to employers in large companies to involve and show case women that are making a difference and who are innovative.

Also, women need to push themselves to the fore front, sell themselves, don’t be afraid to say how brilliant you are.  I know that’s not what most women are about, and as my Mother would say never under sell yourself. So Katia you keep doing what you are doing and women make yourself known.

Personally, being a single Mam, owning my own house, providing a good stable life for my daughter. Professionally, I always thought it was working in Michelin Star restaurant, Relais Chateaux Hotels, but that is something you do to benefit you, your career. I have found working in The Rotunda to be so rewarding. Changing perceptions of hospital food not only for patients but showing inhouse chefs also, that this is achievable. Showing my peers who have worked in the past in similar establishments as me, that we can make such a positive impact to our communities.

I am so proud that people have taken an interest in what I have achieved, and this work has been acknowledged, through newspaper, radio and online interviews.

Travel more and don’t accept your first offer. Work more at the earlier stages of your career in the hot kitchen rather than pastry kitchen.

Most skills can be taught in school or college, but some you learn as you go. Such as creativity. Creating Menus and dishes that compliment each other.

You need personality so you can build relationships with staff from above and below. Being patient with people that are just not getting it. Being able to encourage and praise staff is a very important skill as it helps to get people to buy into what you are trying to achieve.

What your go to comfort food after a long days work.

Ok please don’t mock, but my total comfort food is mash potato, cabbage and bacon ribs, I love it. Then a cup of tea and a frozen curly wurly. I swear I am a chef, but that to me is pure comfort. 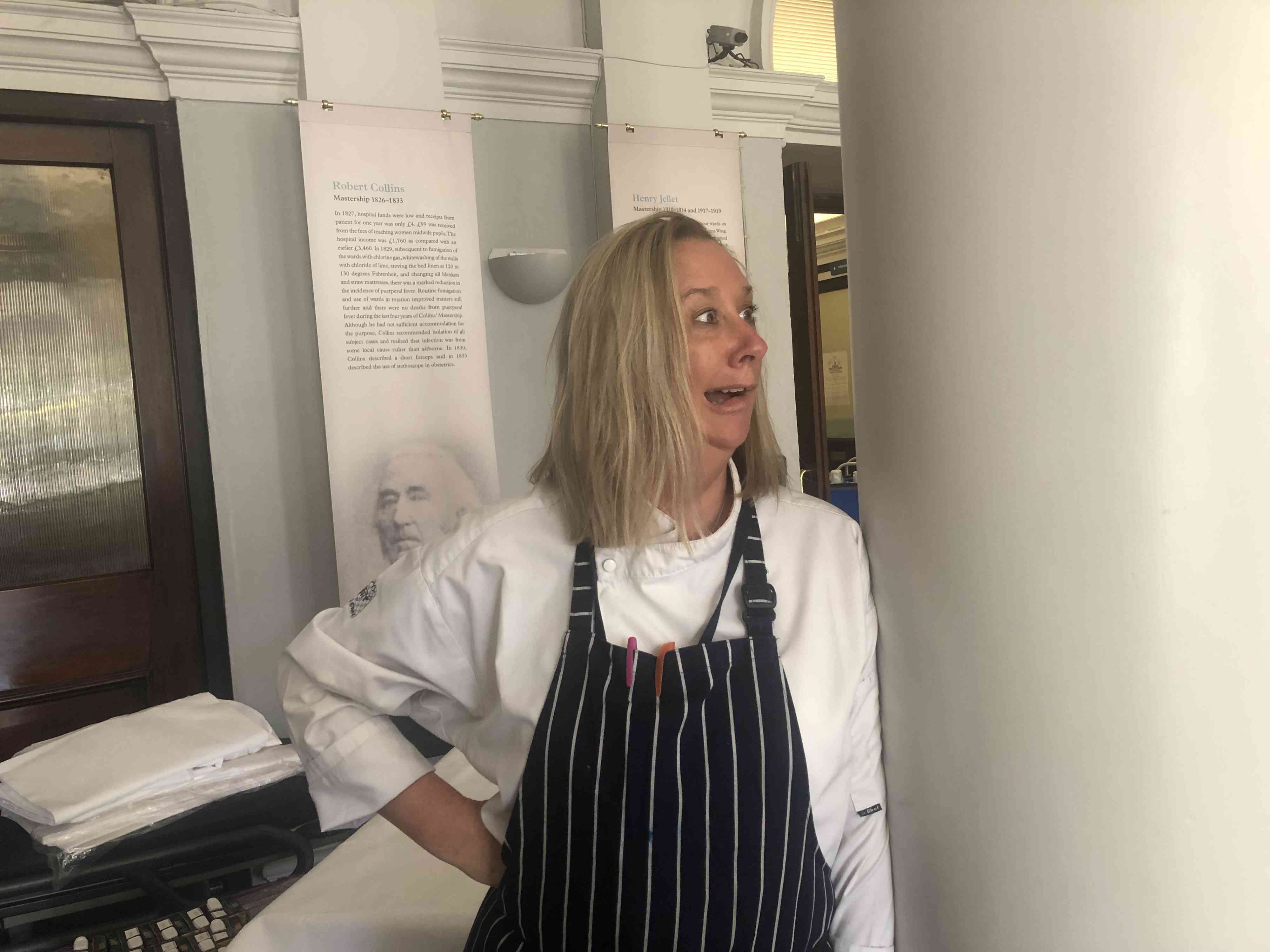