By Katia Valadeau in Food on 3 February 2021 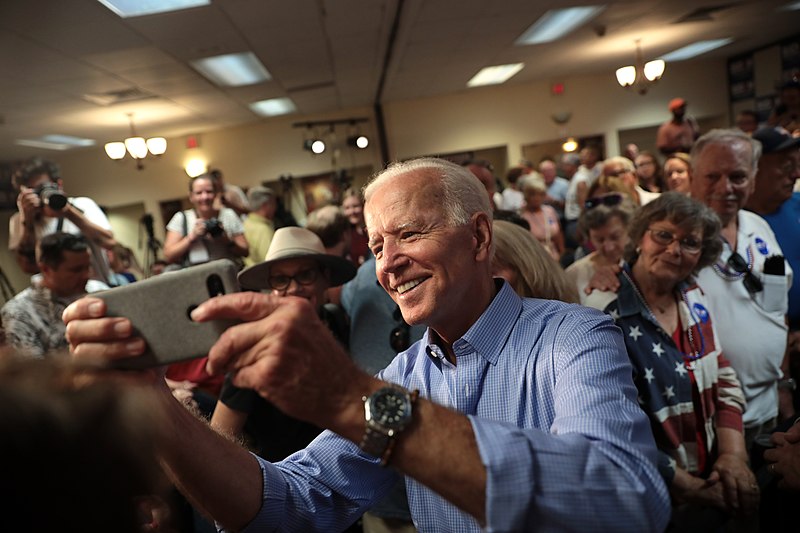 That’s it, the tiny handed orange thing has left the White House, he is now simply the memory of a nightmare, if we are lucky he has achieved all the evil he will ever manage and will be relegated to the dungeons of History. I won’t even mention his name and this is likely the last time, I ever mention him publically. Enters Joseph Robinette Biden Jr, better known as Joe Biden, the new President Of The United States Of America. He is one of ours, as much someone can be when their link to the country is a great-great grandfather from Ballina in Co. Mayo . All in all this is great news for the world for the obvious reason, and for the county for all the tourism it will receive post pandemic, for the duration of Biden’s presidency. You never know, this might even be the year that Mayo is indeed for Sam.

As for me, I hope this reprieve in US History will allow us to concentrate on sorting our own house. You know, the simple things like getting rid of the direct provision system, making retributions to survivors of institutional abuse, reform the justice system and drive out the rising far right movement in Ireland (it’s organised and it is here, make no mistake). In our better Ireland, Hazel Chu can walk out of her home and not be abused, and Timi Ogunyemi can walk with his gorgeous little boy without having to look for danger all the time. Instead, of pointing and laughing at a faraway country, I’d love us to see what we can do and the conversations we can have so much closer to home. Ireland is good and great and we can do it.

I don’t often get political in my writing, but every now and again, things need to be said and after the madness of the last 4 years, I felt the need to let it all out. It is worth mentioning that the above is my opinion and mine alone. None of the people I talked to for this piece are in any way linked to said opinion. They may agree and they may not but I simply didn’t ask them for any comment on that side of things. So there, if you’re still with me, I will now be writing about Joe Biden’s imaginary inauguration dinner. Due to Covid 19, he was unable to have the usual dinner gala, but with his Mayo roots and information I gathered from people who met him during his 2016 visit to Mayo, I was able to come up with a menu that I think reflects some of Ireland’s most exciting food, food that would do us proud.

I did a bit of research and talked to some people in and around Ballina and want to thank Anne-Marie Flynn from the Mayo North Tourism Office, Frankie Mallon of An Port Mor, Martina Calvey of Achil Mountain Lamb and Aisling Flanagan of Velvet Cloud. What was obvious talking to them all was how passionately the people of Mayo feel for their county. They wear their county colours loud and proud. As a foreigner, I’m not sure I ever appreciate fully how much the GAA County culture matters in Ireland. It creates a single focus point and a great sense of community. Mayo people are proud folks and they are keen to show you why.

County Mayo is nestled on the West coast of Ireland between Galway and Sligo. It is not a stop point but a fully-fledged gem on the crown of jewels that is the Wild Atlantic Way. The food culture is deep there and close to the soil and the water. Lamb from salt and wind-battered Achill, seafood plucked fresh from the ocean, salt produced by the Atlantic, cheese from the local sheep. It is all simple but utterly delicious food and I’m only sorry Joe Biden won’t get his feast quite yet.

Joe Biden’s great-great-great-grandfather, Edward Blewitt left Ballina, Co. Mayo to emigrate to Scranton, Pennsylvania during the Famine. However, in a little-known story, before he left Edward played a seminal role in contributing to the survival of thousands of people. by overseeing a public works scheme that changed the landscape of the county, building roads, and putting place drainage works that allowed for greater cultivation of the land. Ballina at the time was ranked as one of the most hunger-ravaged parts of Ireland, and the employment of people on these works ensured their survival. (Source ). Ballina is, coincidentally. officially twinned with Scranton, PA, and regular visits are exchanged in ordinary times between residents of the two towns.

In the meantime, please indulge my whimsy as I write about the local Mayo delicacies Joe Robinette should be dining on. But first, to choose the Chef. There are plenty of talented Chefs in the West but I’m going to go straight to my favourite (it is my whimsy after all). Jonathan Keane has been the Head Chef at the Lodge at Ashford Castle for a while now and, in my opinion, is one of the best chefs in the country. He set up the Cong Food Festival and is all about Slow Food. His knowledge of the coastline and of the wild food growing around Cong is second to none and I know he is of the nose-to-tail persuasion.

We have a host of stunning artisan produce in Mayo and Joe Biden likes his food simple. Frankie Mallon explained that when he visited his An Port Mor restaurant, he enjoyed a feast of gently boiled lobster served with Irish butter and a big bowl of ice cream. Ice cream is Joe Biden’s favourite thing! POTUS is a man of simple taste who also managed to visit Heffernan’s Fine Foods of Ballina. The owner, Anthony Heffernan, proudly operates a farm to fork policy and was excited to feed him a juicy t-bone from one of his own cattle, but the man wanted what the man wanted and a simple chicken salad was requested and served.

In my world, if the gala dinner was on and if it was Mayo themed (as it should be) Joe and his family would sit down to a long table, on a street in the middle of Cong, just by the castle gates, and they are served a couple of amuse-bouches while they take in the menu. The first one would be cocktails sticks of Westport Escargots, heated up gently in a herby garlicky butter and with the stick planted into squares of crusty sourdough. Delicious. The second amuse would be a shot of potato soup sprinkled with a fine dust of pepper dulce for a bit of extra joy.

Wine isn’t the most obvious local drink in Ireland, so for today’s pairings, I would have approached the guys at the Mescan Brewery with our menu and asked them to create a beer or a mead to mark the occasion. Artisanal Buckfast for the Bidens maybe? Sure the limit is our imagination!

Between the amuse-bouches and the starter, it is the law that trays loaded with cocktail sausages be circulated amongst the guests.

The starter would be vast platters of Achill oysters and wild salmon, smoked at Clarke’s of Ballina. The brown bread would be slathered in thick Irish butter, Cuinneog butter, made up the road in Castlebar. If you close your eyes and inhale, you can smell the Wild Atlantic Way and the waves crashing on the coast. Our seafood is second to none in the world and if we treat it simply and serve it as close to its original state as possible, we can’t go wrong at all. A starter fit for a farmer, a queen, or the President of the US of A.

The main affair is my own dream come true and a study in the process of aging. We will need three carcasses from Achill Mountain Lamb, we want a lamb, we want a hogget and we want a mutton. I want them seasoned with some locally grown rosemary and some Achill sea salt. Nothing more. They will be slowly cooked over an open pit and will be served with mountains of steamed floury potatoes topped with too much butter and a bit more salt. The simplest of food, but imagine the sheer luxury of tasting 3 different ages of an animal. A veritable feast for the senses and a full nose to tail experience, which is so important if you respect the animal you’re about to eat.

For dessert, I’m opting for cheese, just a nice chunk of Rockfield, the local sheep cheese, served with some great crackers and black cherry jam. But Joe Biden likes ice-cream, I hear you say. Fear not, I’ve got him covered. For him, we will have whipped up a great bowl of vanilla ice-cream made with Velvet Cloud cream.

And here we are, let’s all sit back and relax our belts, with a meal like this, surely Joe is all set up for the next four years!