GREAT TOPPINGS WILL ELEVATE YOUR SOUP 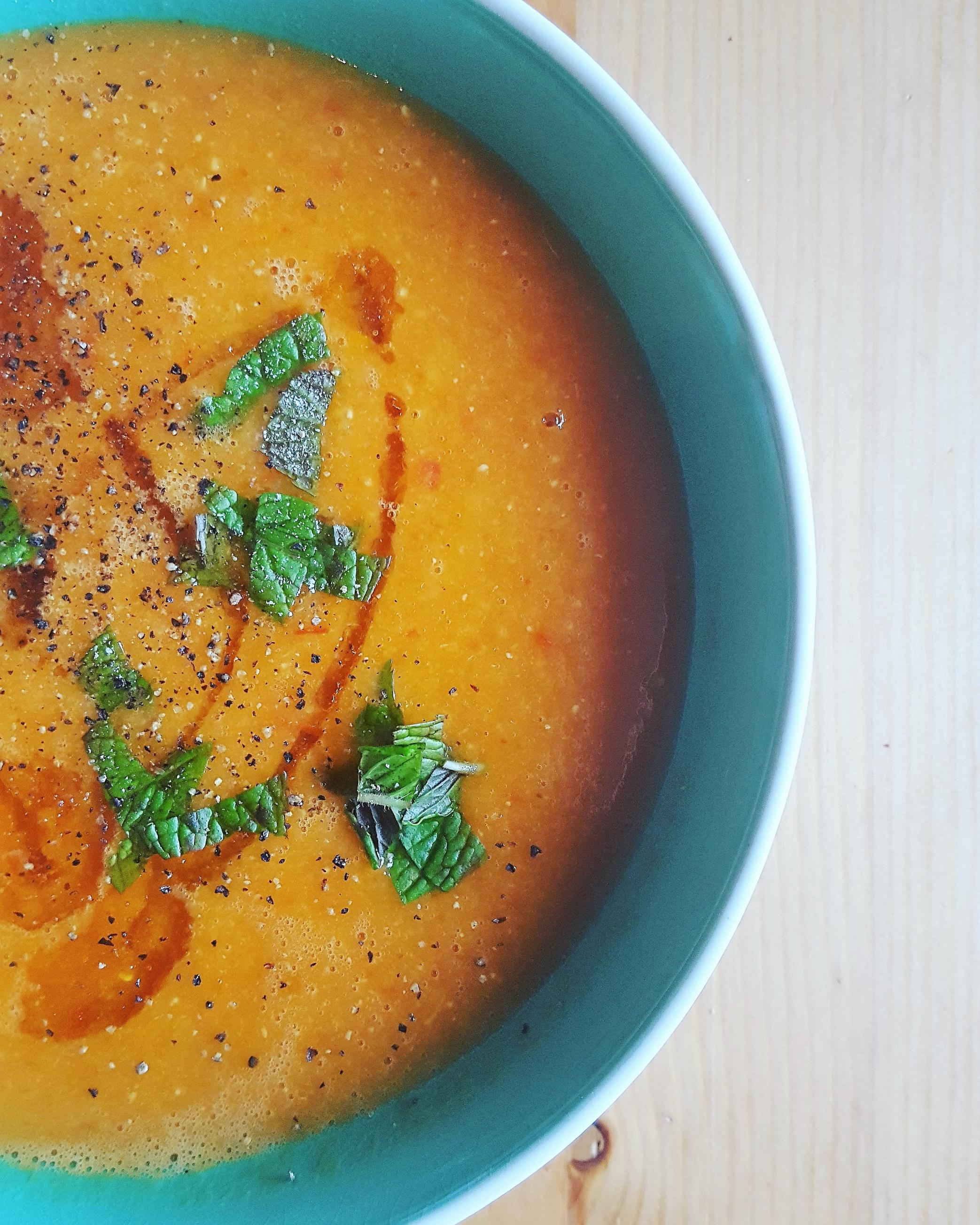 I refer to them as toppings, but maybe you call them soup garnishes? I’ve even seen them related as soup toppers, but honestly, I’m not cool enough for that one. They are much of a muchness though and they all refer to the same thing: those delicious few bits that you add to your bowl of soup to bring it from being just about comforting to interesting and sometimes even a little bit exciting.

I come from the school of thought (merci Maman), that in winter you must eat a lot of soup. As an adult, I understand the many benefits, not only will you eat more vegs without even thinking about it, but it’s one pot, one bowl and you don’t have to faff. Give the kids a couple of babybels or laughing cow triangles to chop in there and dinner is sorted. For a busy working woman with a decidedly lazy husband, winter soup was a godsend.

So naturally, as a thick-headed child (HA! I hear you say), I took against it. To trick myself into liking them as an adult, I had to learn to get a bit frivolous and inventive with the toppings.  I also asked on twitter and instagram for people’s favourite soup toppings and got super answers so do take the time to click through and read my followers suggestions!

Today, as an adult, I think soup is a bowl of pure pleasure and should be considered as more than the sum of its part. You want surprising harmony in that bowl. You want to feel satisfied by it.

It could be something as simple as a few crumbs of toasted brown bread or a luscious golden cheesy crouton on top of a french soup. You could àdd some toasted seeds and nuts (think pumpkin seeds, sesame seeds or nigella seeds or some crushed hazelnuts), imagine a few roasted corn kennels or if that’s your bag a few roasted chickpeas. Think deef fried spinach or dry seaweeds. Whatever way you look at it, you’re looking for something to cut that slurp factor, you want that beautiful crunching sound in your ear as you’re biting into your soup. That’s right, I said it, you want to bite into that soup.

PUT SOME CHEESE ON IT

Whilst some might argue that a whole bowl of melted Raclette could be considered a liquid and therefore soup, I’m going to step away from this tasty madness and take the road most travel. That which sees the cheese added to the soup as a garnish. I find that soups made with roots such as parsnips, celeriac or beetroots can hold their own against a crumble of great blue cheese (we are so spoiled for those in Ireland, think Crozier or Young Buck which are of the creamier variety). You could make some parmesan crisps (grate some into little piles and stick them in a hot oven fast until they melt) or you could grate a sharp cheddar. For the kids, you could give them what my mam used to give us, a triangle of laughing cow or a little babybel, for just a bit of creamy savouriness. A crouton with slow-cooked onions and grilled goat cheese, floating on lettuce and pea soup is something you won’t forget.

If you’re making a pea soup, reserve a handful of peas and sprinkle them on top or slice a couple of mange-touts very finely. Did you make Jerusalem artichokes? Just slice one root finely and either deep-fry them or roast them in the oven and add them to the top. Basically, use the basic ingredients and use them in a different way to make the soup a bit more interesting. For pumpkin soup, think to toast the pumpkin seeds with a bit of salt and add them on top of the soup. For potato soup, you could cube a spud in small chunks and fry it with a bit of garlic.

Drizzle a finishing oil like sesame seed oil or add a nugget of really good butter to melt just at then end. Actually, brown butter and some almond shavings can be delicious. Thinks a couple of slices of chorizo or some slivers of prosciutto or last night’s boiled ham.  A dustink of paprika or some dukka? Maybe a bit of za’atar or some Korean chili flakes. You could use a table spoon of Chinese fermented black beans or some powdered dry porcini mushrooms for that extra kick of umami. Fresh herbs are never wrong and a great big dollop of good creme fraiche can make everything feel richer. Finally, don’t underestimate the power of a sprinke of freshly cracked pepper and a great finishing salt (think smoked Achill Island salt). Your soup is your oyster, play with it.