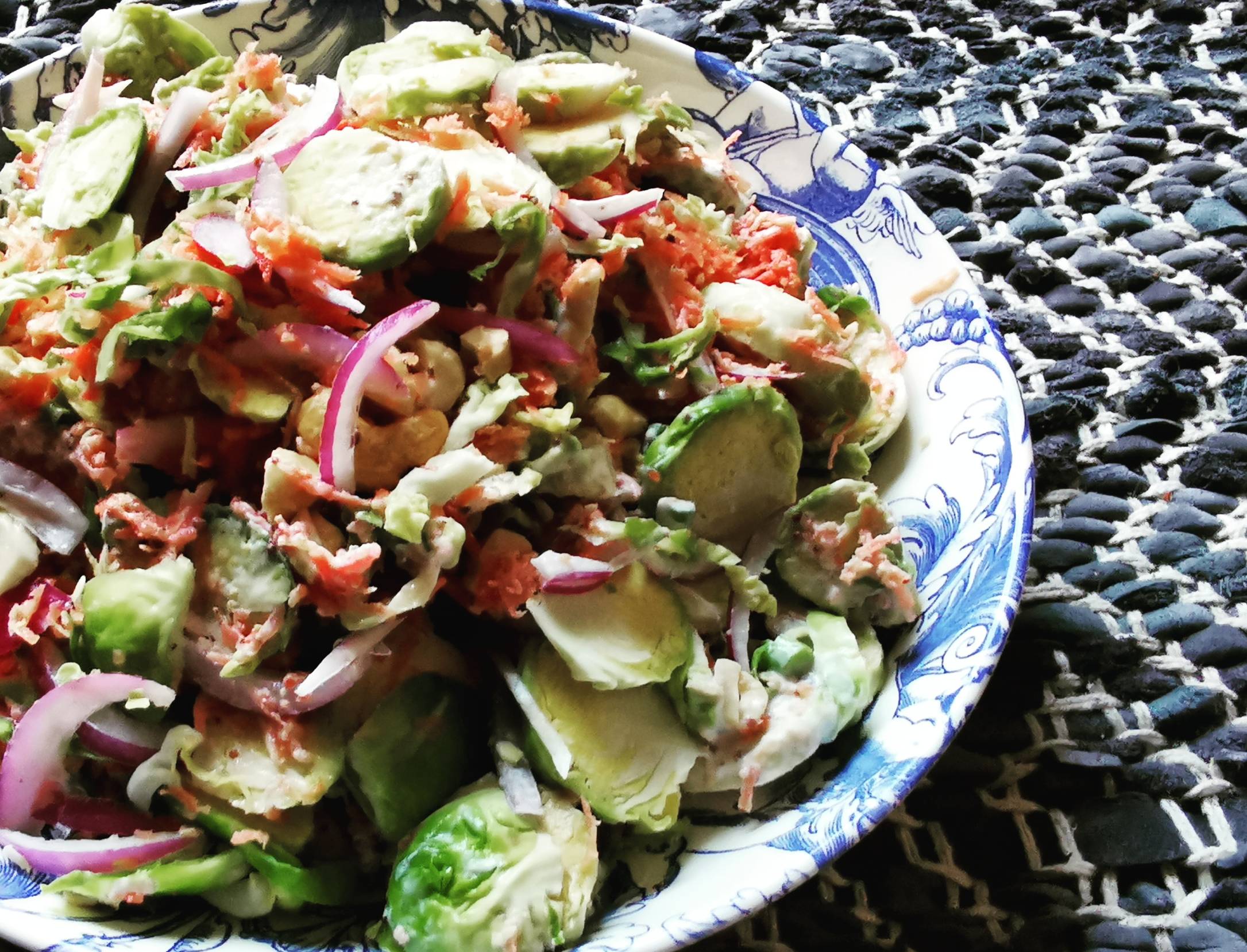 I find myself writing this post on the couch, ensconced between one of my cats (Miisu since you’re asking) and a mostly empty tin of Quality Streets (the only ones left are the chocolate and orange ones because what kind of animal would put fruit in their chocolates). It’s that quiet time of the year, a few days after Christmas but still a few days before New Years and there are a lot of sprouts in the house.

I’ve seen a great article on what to do with left-over turkey by Katy McGuinness and endless pictures of ham sandwich, but no one is talking about the vegs. And to me, the vegs are superbly important. What’s the point of great ham if you don’t have an exciting veggie dish to eat on the side?

A week before Christmas, there was a lovely evening gathering with my boyfriend’s family (can you still say boyfriend when you’re 41? It’s starting to feel weird) and his dad made this most delicious sprout slaw based on a recipe written up by Nadia Hussain for the BBC Food website.  It’s funny, Adrian took to cooking quite late in life but he has done so with excellent flair. I am excited to try his next concoction every time we visit and I have yet to be disappointed.

At this point, I could simply tell you to do as per the recipe on the original website, but sure, what would be the point of this post if that was the only thing for me to do? To get the original recipe please click through the link above or read further down.

Instead, I want to talk to you about the principle of this coleslaw. It comes in two parts: the slaw itself and the dressing.

Nadia uses Brussel Sprouts, carrots, red onion, and cashew nuts. This is also what I used as I had all the ingredients, but I believe this slaw would work very well with alternatives. The sprouts can be replaced by any tight brassica (I draw the line at kale and soft leaf cabbage), raw broccoli would work very well if it’s cut up small, The carrots add a great sweetness to the dish and do not really have an alternative. The red onion could well be scallions or white onion, but the trick will be to use the freshest onion to avoid that forever after taste. Finally, the cashew nuts can be any nuts you want! Katy tried this recipe and toasted the cashews which is a good idea, which I had not thought about.

Nadia uses greek yoghurt, mayonnaise, lemon juice, lemon zest, wholegrain mustard, cumin seeds, chives and flat leaf parsley. You could easily change this dressing dairy-free by swapping the yoghurt for tahini (although you may need a bit of water to loosen it up). I also feel that, in this case, you could use any fresh herbs you have knocking about.